The Absolute Strategies Fund has performed well given the incredible moves in markets over the past six months and the continued divergence between growth vs value indices. Our hedging and net short position in February and March enabled the Fund to capitalize on volatility and produce a positive return of 7.5% during the peak to trough market crash (Feb 19 to Mar 23). During this same time the HFRX Global Hedge Fund Index lost -11.0% and the S&P 500 lost -33.8%. The Fund’s positioning was adjusted to market-neutral toward the end of March, but the lack of mega-cap growth exposure has hampered upside performance, (as illustrated below, the broad market’s performance is being driven by just a handful of stocks). Through June 30, 2020, the Fund returned 2.4% year-to-date, versus -1.1% for the HFRX Index and -3.1% for the S&P 500.

Financial markets have exhibited a “crash upward” like trajectory since the lows in March. Both the Federal Reserve and the US government have flooded the markets and individuals with trillions of dollars in stimulus in an effort to prevent a further breakdown in the economy. It looks to us like the Fed is buying just about anything that isn’t nailed down, which makes all market movements highly speculative. This unprecedented level of liquidity is creating a bubble-like environment simultaneous to an economic activity collapse from COVID-19 related shutdowns.

The current infusion of stimulus is also likely to create a sizable rebound in the third quarter, including a possibly double digit gain in GDP growth. Market participants appear to be aware of this; however, we believe permanent damage has been done to numerous small businesses and that personal bankruptcies could soar as a result. Whether or not massive stimulus and liquidity can create a larger, more durable economic rebound is ultimately what will determine the direction of the overall market from here. The addition of massive amounts of debt to an already bloated fiscal condition could result in a repricing of interest rates, inflation, or both. If economic activity does not return to normal, years of stagflation seem like a reasonable outcome. 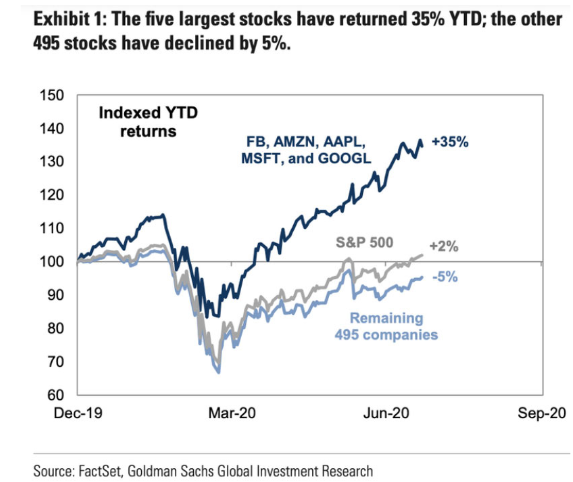 We believe these 5 companies are trading at very high valuations, all with price to sales ratios above 10.0 and/or price to earnings ratios over 35. Apple’s price to sales ratio of 7.6 is more than 2 times its 5-year average of 3.4. Surprisingly, Apple’s operating income growth over the past 5 years has been stagnant, producing less operating income in 2019, than it did in both 2018 and 2015. Apple’s annualized operating income growth since 2012 is just 2.1%. Yet, the stock price is up over 340% since 2015, and the market capitalization just hit $2 trillion. In our opinion, only the magic of debt and stock buybacks has enabled Apple to “grow” to this extent. The value placed on the company’s stale operating growth stirs memories of former financial engineering stars such as IBM and General Electric. Additionally, what happens to cost of goods sold and profit margins if Apple is forced to relocate vast operations from China? What about Amazon with a market cap over $1.5 trillion and a price to earnings ratio over 100?

We do not view any of these companies necessarily as “bad” investments. In fact, from time to time the Fund has held long positions in most of them, just not

to the level of concentration compared to cap-weighted market indices. The concern is whether the recent performance of these few companies is having too large an impact on major market indices to remain sustainable. Markets are levitating on the back of a handful of over-valued mega-cap technology and consumer stocks that have seen a burst of economic activity from COVID-19 lockdowns and government stimulus checks. The rest of the economy, including banks and industrial companies, apparently do not even need to exist.

This situation is very similar to 1999-2000 when large tech stocks benefited from the Y2K technology blow off and most value-oriented companies hit rock bottom. The following extraordinary market divergence is notable given similar historical episodes (through July 30):

Performance data quoted represents past performance and is no guarantee of future results. Current performance may be lower or higher than the perform-ance data quoted. Investment return and principal value will fluctuate so that an investor’s shares, when redeemed, may be worth more or less than the original cost. Annualized

returns current to the most recent month end can be obtained by calling the Fund at 888-99-ABSOLUTE. Returns include the reinvestment of dividends and capital gains. Some of the Fund’s fees were waived or expenses reimbursed; otherwise, returns would have been lower. The Absolute Strategies Fund’s total annual operating expense ratio (gross) for Institutional Shares is 2.37% and the net expense ratio is 1.67% through August 1, 2021. However, the Fund’s Adviser has contractually agreed to waive its fee and/ or reimburse Fund expenses to limit Total Annual Fund Operating Expenses to 1.99% (the“Expense Cap”) through August 1, 2021. This Expense Cap, which excludes all taxes, interest, portfolio transaction expenses, dividend and interest expenses on short sales, acquired fund fees and expenses, broker fees, proxy expenses and extraordinary expenses, may only be raised or eliminated with the consent of the Board of Trustees.

(Continued) Value vs growth performance is again reaching new levels of disparity. The very low correlation of small caps vs mega caps is also notable. This is a highly divergent situation that we believe will be dramatically repriced, particularly if there is an uptick in interest rates.

The Fund has been positioned for a reversal of this rare economic dichotomy. We believe having long exposure in under-valued, solid companies vs. short exposure in over-valued growth can provide substantial diversification and unique risk-adjusted performance to an otherwise beta-driven portfolio. The Fund also has a large allocation to convertible arbitrage, which has been a consistent performer and adds balance to our long value, short growth exposure. We believe markets are going to remain volatile and market drawdowns and illiquid conditions offer opportunities for disciplined risk management and skilled trading. Overall exposures have become increasingly defensive as indices have rallied to new highs, and the Fund is currently positioned net short.

*Definitions: Beta is the measure of a fund’s relative volatility as compared to the S&P 500 Index which by definition is 1.00. Accordingly, a fund with a 1.10 beta is expected to perform 10% better than the Index in up markets and 10% worse in down markets. The S&P 500 Index is a broad-based, unmanaged measurement of changes in stock market conditions based on the average of 500 widely held common stocks. The HFRX Global Hedge Fund Index is designed to be representative of the overall composition of the hedge fund universe. It is comprised of all eligible hedge fund strategies; including but not limited to convertible arbitrage, distressed securities, equity hedge, equity market neutral, event driven, macro, merger arbitrage, and relative value arbitrage. The Russell 1000 Value Index refers to a composite of large and mid-cap companies located in the United States that exhibit a value probability. The Russell 1000 Growth Index refers to a composite that includes large and mid-cap companies located in the United States that also exhibit a growth probability. The price-to-earnings ratio is the ratio for valuing a company that measures its current share price relative to its per-share earnings.

Additional Risks: Since the Fund utilizes a multi-manager strategy with multiple subadvisers, it may be exposed to varying forms of risk. The Fund’s net asset value and investment return will fluctuate based upon changes in the value of its portfolio securities. There is no assurance that the Fund will achieve its investment objective, and an investment in the Fund is not by itself a complete or balanced investment program. For a complete description of the Fund’s principal investment risks please refer to the prospectus.

The Fund may also invest in high yield, lower rated (junk) bonds which involve a greater degree of risk and price fluctuation than investment grade bonds in return for higher yield potential. The Fund’s distressed debt strategy may involve a substantial degree of risk, including investments in sub-prime mortgage securities.

The Fund may purchase securities of companies in initial public offerings. Special risks associated with these securities may include

a limited number of shares available for trading, unseasoned trading, lack of investor knowledge of the company and limited operating history. The Fund may leverage transactions which include selling securities short as well as borrowing for other than temporary or emergency purposes. Leverage creates the risk of magnified capital losses.

The Fund may also invest in derivatives which can be volatile and involve various types and degrees of risks, depending upon the characteristics of a particular derivative. The Fund may invest in options and futures which are subject to special risks and may not fully protect the Fund against declines in the value of its stocks. In addition, an option writing strategy limits the upside profit potential normally associated with stocks. Futures trading is very speculative, largely due to the traditional volatility of futures prices.

Investors should carefully consider the Fund’s investment objectives, risks, charges and expenses before investing. This and other information is in the prospectus, a copy of which may be obtained by calling (888) 992-2765 or visiting the Fund’s web site: www.absoluteadvisers.com. Please Read the prospectus carefully before you invest.