Where to begin. It is difficult to continuously write sound analysis about markets that are almost solely driven by central bank money printing and investor speculation. And now we need to add a few new items of froth to categorize under “animal spirits” that redefine historical financial manias. These latest iterations of speculative fervor are truly beyond belief. We will try to be brief.

Within the past few months we have seen wild speculation and stock price manipulation in real time by young retail investors trying to, in their words, “take down Wall Street.” Many of these small speculators turned to the investing world simply because their sports-betting hobbies were put on hold due to the pandemic sports shutdowns. Using their gaming and gambling capabilities, they developed an impressive network of stock speculators through the Robinhood trading app, Reddit chat boards and other primary social media outlets. This unknown gang of revolutionaries produced a populist uprising through a constant stream of social media momentum that soon caught the attention of larger, professional speculators. Many high-flying stocks went up 5-10 fold in a matter of weeks before crashing back to reality. The most notable was Game Stop. Game Stop stock price went from $20 to over $500 in roughly 10 days, then dropped back to as low as $50 a few days later¹. The story was on every evening news program and overnight riches were the talk of the nation. In the end, many retail investors were crushed. But the throng of gamblers were successful in causing Wall St headaches. They forced short-covering losses for many, including rock-star hedge fund Melvin Capital Management that needed to be bailed out after a 53% loss in January alone.

There were other speculative themes that did not receive as much media attention. There was the boom in prices and funding of new finance vehicles that act as publicly traded “blank-check” companies, formally known as special purpose acquisition companies (SPACs). SPACs act as a financing shell for future, unknown IPOs. Media celebrities and athletes started using their fame to promote new SPACs to collect fees on billions of dollars raised. On top of a record year in 2020, 300 new SPACs raised $100 billion in the first quarter of 2021 alone. Longtime investor Jeremy Grantham called SPACs, “a license to rip investors off.”

The crypto-world also kept pace with the mania as Bitcoin advanced over 300% since October. But the real winner was an obscure coin called Dogecoin (DOGE). DOGE was also promoted by celebrities on social media and instantly took on hero status with a continuous flow of DOGE “rocketship” memes. One championed effort was a meme of Elon Musk, Gene Simmons and Snoop Dogg; DOGE rose roughly 1000% in less than 2 weeks¹. Then there was the crypto boom in “non-fungible tokens” (NFTs). NFTs simply place a blockchain identifier on virtual art and other digital collectibles. They appear to be an attempt at creating artificial scarcity and have no real value.

In our opinion, many of these episodes and this craze in speculative creativity puts 1929, 1999 and 2007 to shame. It’s never been easier for anyone to speculate in anything at any time, day or night. In fact, since mid-March 2020 one gaming stock, Penn National, rose nearly 3000%, before cooling off in the past month¹. It’s difficult not to draw comparisons between this era and the Tulip mania of 1637.

Perhaps the important event from a signal perspective is the spectacular fall of Bill Hwang’s Archegos Capital Management. Market cycles have always produced single-fund blow-ups from over-leverage, complexity, and margin calls. Long-Term Capital and Bear Stearns’ sub-prime Funds come to mind from more recent bubbles. But it’s hard to imagine a relatively unknown $20 billion hedge fund simply leveraging up high-beta growth stocks resulting in such a destructive loss of capital. Hwang was using swaps to leverage his investment portfolio up to $100 billion, an enormous sum. Several banks took huge losses to cover the margin and swap debts. Considering this implosion took place under fairly tame market conditions, investors should question what could come should a larger, more volatile event take place. On top of the other speculative concerns and hedge fund blow ups, this is a “tip of the iceberg” event that results in banks reigning in margin and speculative borrowing across the entire investment landscape. It is usually a warning signal for what’s to come.

It has been a long time since price and value mattered. We are well beyond the debt and valuation levels of 1929 and 1999. Incredibly, total U.S. debt is over $77 trillion ($620,000 per household). At the 2000 bubble peak the liability was $260,000 per household and at the peak of the 2007 housing bubble, $475,000. Most Americans have no idea what these archaic measures really mean. Many professional investors do, but they no longer pay much attention to them. As such it has become somewhat meaningless to belabor relative valuation statistics at this point (see chart below if curious). We are only able to judge the size of the overall bubble environment based on more anecdotal blow-off levels of greed and speculation: nightly news headlines, celebrity pitchmen, record margin debt/GDP (see chart below), record household equity allocations, new era proclamations, hero-worshiping of fund managers, and numerous investing cults. On those fronts, we seem to be nearing what would equate to the end of a larger financial cycle that has accumulated over the last 20+ years. This means, from a technical standpoint, we are nearing the end of a market Supercycle that dates back many decades.

Given the above, we are keeping portfolio positioning relatively simple. We believe the end of this market cycle could be very significant, and may result in the S&P 500 reversing down below the March 2020 lows, and possibly substantially lower; this would amount to market losses of at least 50%+. We also recognize the market continues to have potential for a continued melt-up, especially given the timing of the most recent stimulus checks. Many investors tried their luck with small spec stocks but could add this new found money back into large cap stocks. As such we have tried to maintain some patience regarding our positioning by maintaining a substantial net short position in market indices paired with shorter term upside call options. This provides the portfolio with a hedge against further speculative impulses while maintaining our longer term positioning. Should markets begin a new bear market, we intend to maintain an aggressive short position. 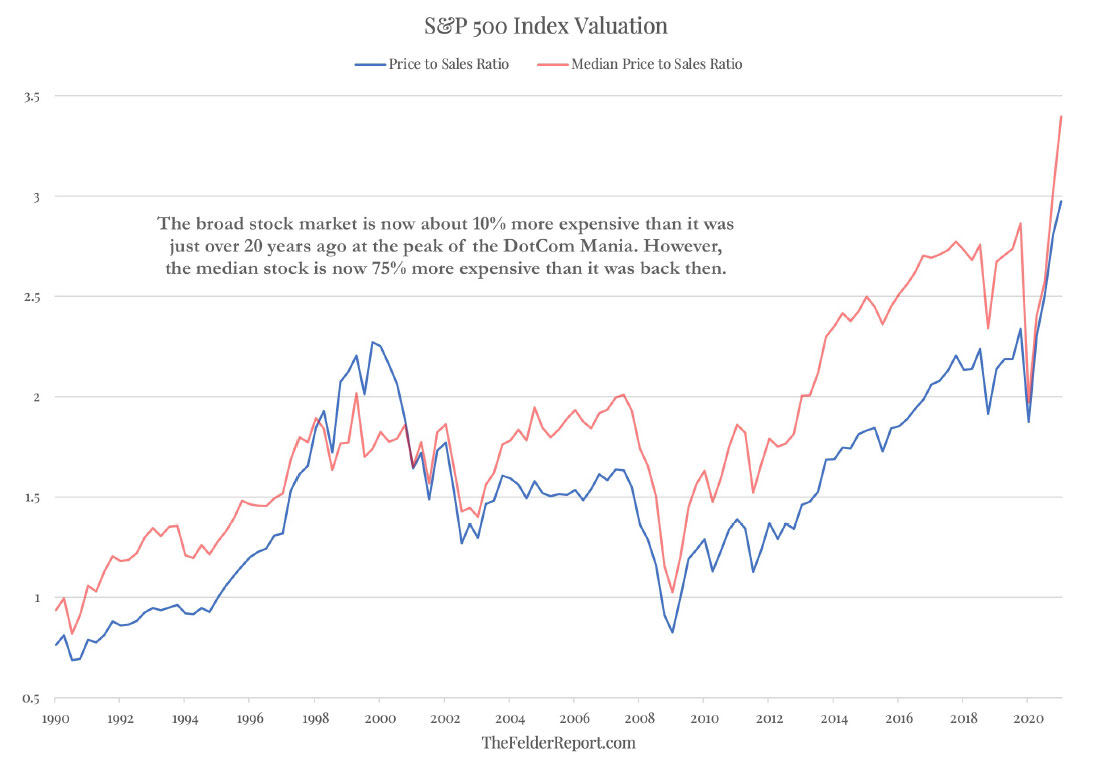 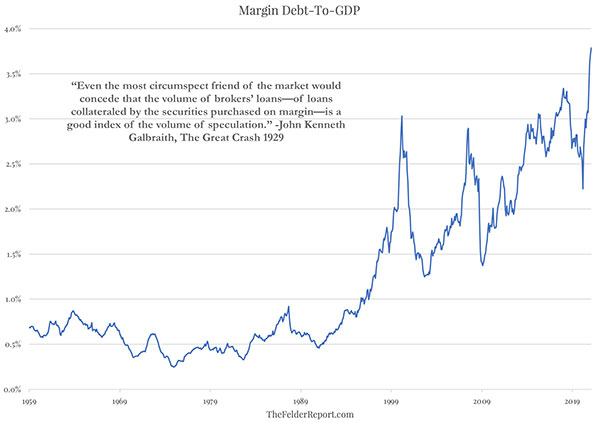 1) As of 3/31 the Fund did not hold shares in Game Stop, DOGE or Penn National. Fund holdings and sector allocations are subject to change and should not be considered recommendations to buy or sell any security.

*Definitions: Beta is the measure of a fund’s relative volatility as compared to the S&P 500 Index which by definition is 1.00. Accordingly, a fund with a 1.10 beta is expected to perform 10% better than the Index in up markets and 10% worse in down markets. The S&P 500 Index is a broad-based, unmanaged measurement of changes in stock market conditions based on the average of 500 widely held common stocks. It is not possible to invest directly in an index. The price-to-sales (P/S) ratio shows how much investors are willing to pay per dollar of sales for a stock. The P/S ratio is calculated by dividing the stock price by the underlying company’s sales per share. Margin Debt to GDP is the ratio of FINRA total debit balances for margin accounts to total US Gross Domestic Product

Additional Risks: Since the Fund utilizes a multi-manager strategy with multiple subadvisers, it may be exposed to varying forms of risk. The Fund’s net asset value and investment return will fluctuate based upon changes in the value of its portfolio securities. There is no assurance that the Fund will achieve its investment objective, and an investment in the Fund is not by itself a complete or balanced investment program. For a complete description of the Fund’s principal investment risks please refer to the prospectus.

The Fund may also invest in high yield, lower rated (junk) bonds which involve a greater degree of risk and price fluctuation than investment grade bonds in return for higher yield potential. The Fund’s distressed debt strategy may involve a substantial degree of risk, including investments in sub-prime mortgage securities.

The Fund may purchase securities of companies in initial public offerings. Special risks associated with these securities may include

a limited number of shares available for trading, unseasoned trading, lack of investor knowledge of the company and limited operating history. The Fund may leverage transactions which include selling securities short as well as borrowing for other than temporary or emergency purposes. Leverage creates the risk of magnified capital losses.

The Fund may also invest in derivatives which can be volatile and involve various types and degrees of risks, depending upon the characteristics of a particular derivative. The Fund may invest in options and futures which are subject to special risks and may not fully protect the Fund against declines in the value of its stocks. In addition, an option writing strategy limits the upside profit potential normally associated with stocks. Futures trading is very speculative, largely due to the traditional volatility of futures prices.

Investors should carefully consider the Fund’s investment objectives, risks, charges and expenses before investing. This and other information is in the prospectus, a copy of which may be obtained by calling (888) 992-2765 or visiting the Fund’s web site: www.absoluteadvisers.com. Please Read the prospectus carefully before you invest.